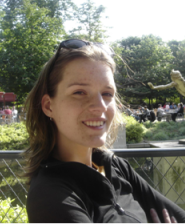 For my PhD-project, I am studying parthenogenesis-inducing Wolbachia bacteria in two parasitoid wasps, Tetrastichus coeruleus and Asobara japonica.
Wolbachia are intracellular, symbiotic bacteria belonging to the order Rickettsiales within the a-Proteobacteria. Wolbachia is known to infect a wide range of arthropods, including insects, spiders, mites, scorpions and isopods, and has also been found in nematodes. A recent analysis estimated that 66% of all insect species is infected with Wolbachia. Wolbachia is maternally inherited, since a sperm cell contains too little cytoplasm to harbour the bacterium. Therefore, they benefit from female-biased sex ratios in their hosts. To enhance its own transmission to the next generation, Wolbachia can induce various alterations of the reproduction mechanism of its host, such as cytoplasmic incompatibility, feminization, male killing and parthenogenesis. Wolbachia-induced parthenogenesis is most commonly found in haplodiploid organisms, such as Hymenoptera.
Tetrastichus coeruleus (Hymenoptera) is an egg-larval parasitoid of the Asparagus beetle (Crioceris asparagi). C. asparagi lives on the Asparagus plant (Asparagus officinalis), which grows on sandy soils, such as coastal dune areas, and as a crop in monoculture on agricultural fields. In the Netherlands, T. coeruleus can be found both in the coastal dune areas and on agricultural fields. The interesting thing is that coastal dune populations of T. coeruleus are infected with parthenogenesis-inducing Wolbachia, while agricultural field populations are not infected with this bacterium. Therefore, we find asexual populations (only females) of T. coeruleus that reproduce through parthenogenesis in the Dutch dunes and sexual populations (males and females) of T. coeruleus on Dutch agricultural fields. Interestingly, all populations of T. coeruleus in Massachusetts (USA) and Southern France are infected with the same parthenogenesis-inducing Wolbachia. I am interested in the differences between these populations.
Asobara japonica (Hymenoptera) is a larval parasitoid of Drosophila flies and it occurs on many islands in Japan. As in T. coeruleus, some populations of A. japonica are infected with parthenogenesis-inducing Wolbachia, while other populations are not. While infected asexual populations are known from the two Japanese main islands, uninfected sexual populations are restricted to several small islands. The interesting thing about A. japonica is that asexual females sometimes produce a few males. We want to investigate why and how these males are produced. We are also interested in the effects of Wolbachia on these males.