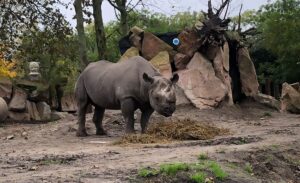 The “Rhinoceromics” project at the Leiden Centre for Applied Bioscience is studying health issues in captive black rhino’s using various omics techniques, including metagenomics. As a sideline, we wanted to see whether we could assemble a large eukaryotic genome using only nanopore reads. This produced an assembly of comparable size and contiguity to the current reference genome for this species. Our assembly will be used as reference assembly in the metagenomics project.